So, I like street performing and have been doing so now for a number of years. Its taken me a long time to accept this, and I have battled against it for years… but crowds really like LIMO’s.

In street performer circles - this is a “Large Impressive Metal Object”. my LIMO of choice is the giraffe Unicycle. 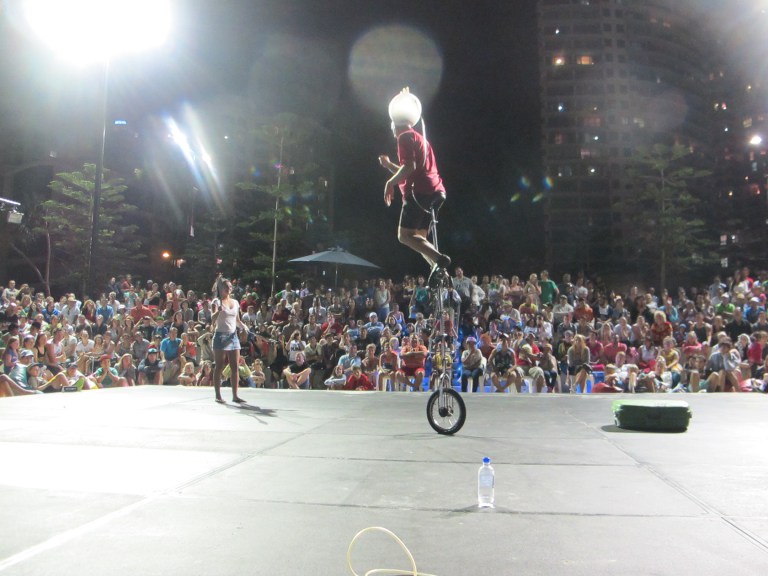 Performing with my LIMO (A Giraffe Unicycle)

The LIMO can change a mediocre show into an OK show, a good show into a great show - and a great show into a spectacular show! But it’s greatest strength, is also it’s greatest weakness. Many performers won’t take the time to develop original show material as the LIMO “does” a lot of the work for you. Im as guilty as the next guy, and for a long time kinda despised using the Unicycle in my show.

Other performers might use a free standing ladder, or a table, or even a static pole. But my favourite is the Tall Unicycle. Its a prop many of us can kind of relate to, as we’ve all (well almost all) learnt how to ride a two wheel bike. Audience members are always fascinated with the unicycle, and even more so the tall unicycle. My current ride is around 2 meters in height with a custom built smaller 16” wheel. I had the custom wheel made as it packs better in my suitcase. It has the bonus effect of making the Uni look just that little but taller.

Many performers discredit other performers who use a LIMO, as the LIMO instantly gives the performer credibility in the eyes of the public. While this is what all performers desire, some see it as being uncreative, generic or just downright lazy. And I’ll be honest, I suffer from this too, and will instantly write-off anyone I see using one as a generic hack… myself included.

Street performing with no LIMO

Since the birth of my daughter 2 years ago, and me focusing more on my company - I decided I would work without the LIMO. The first thing I noticed was I made less money in my hat. Though only on shows which didn’t go as planned. I did find that a good show is a good show with or without the LIMO, and that was comforting. But, I also found that those good shows were harder to get! Especially when performing outside of festivals. Festival Street Shows and Street Shows are entirely different animals - what may work well at a festival will not necessarily translate to a working Street Show. Not all Street pitches are created equal either. Maybe write about that some other time.

So anyway, I performed two summer seasons in Europe, and one summer season in Australia LIMO-free and loved every minute of it. For starters I wasn’t dragging around an extra 15kg in my suitcase. I also didn’t have to worry about dismantling and reassembling it every time I travelled to a new Gig.

…and back to the LIMO!

However, once I arrived back home to Australia this past September, I felt like dragging the Uni back out. I wasn’t sure how it would go, as I hadn’t done a show on the Unicycle for almost 2 years (I still ride my small uni from time to time) but the show actually went pretty well. It was a little rusty obviously, and i’d forgotten most of the gags - but I really enjoyed the show. Now I find myself looking forward to the next show, and super stoked to head out and do a show with my Uni.

I feel I’ve finally come to appreciate what the LIMO adds to the street performing, without feeling like I’m letting myself down for using it. My son prefers my Unicycle show too.
Double winning! 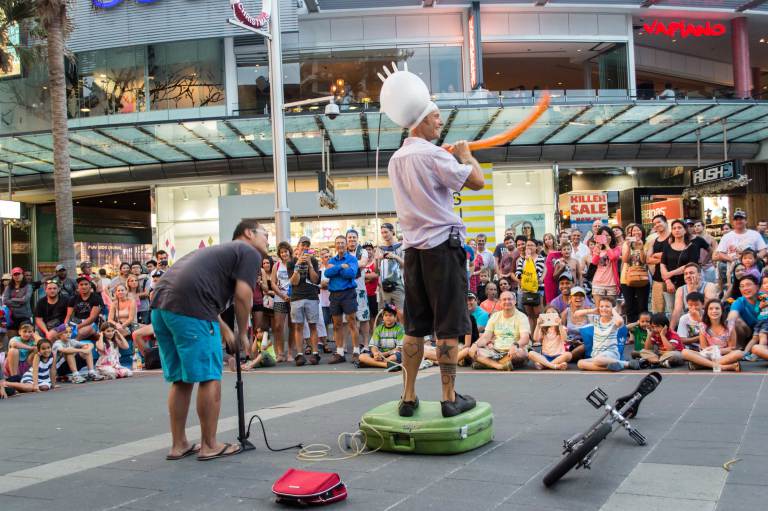 Street performing with my tall Uni