I first had the idea that it would be kinda cool to do a marathon around 4 years ago. Not seriously, but it was just one of those thing sitting in the back of my mind. I did a little research, and saw the very next marathon coming up was a night marathon in India. It seemed like a good idea, it was only a week away, so I looked into tickets and flights. Luckily before i payed for anything, I discovered I didn’t actually have enough time to get visas sorted in time. So I shelved the idea, and didn’t really think much more of it. 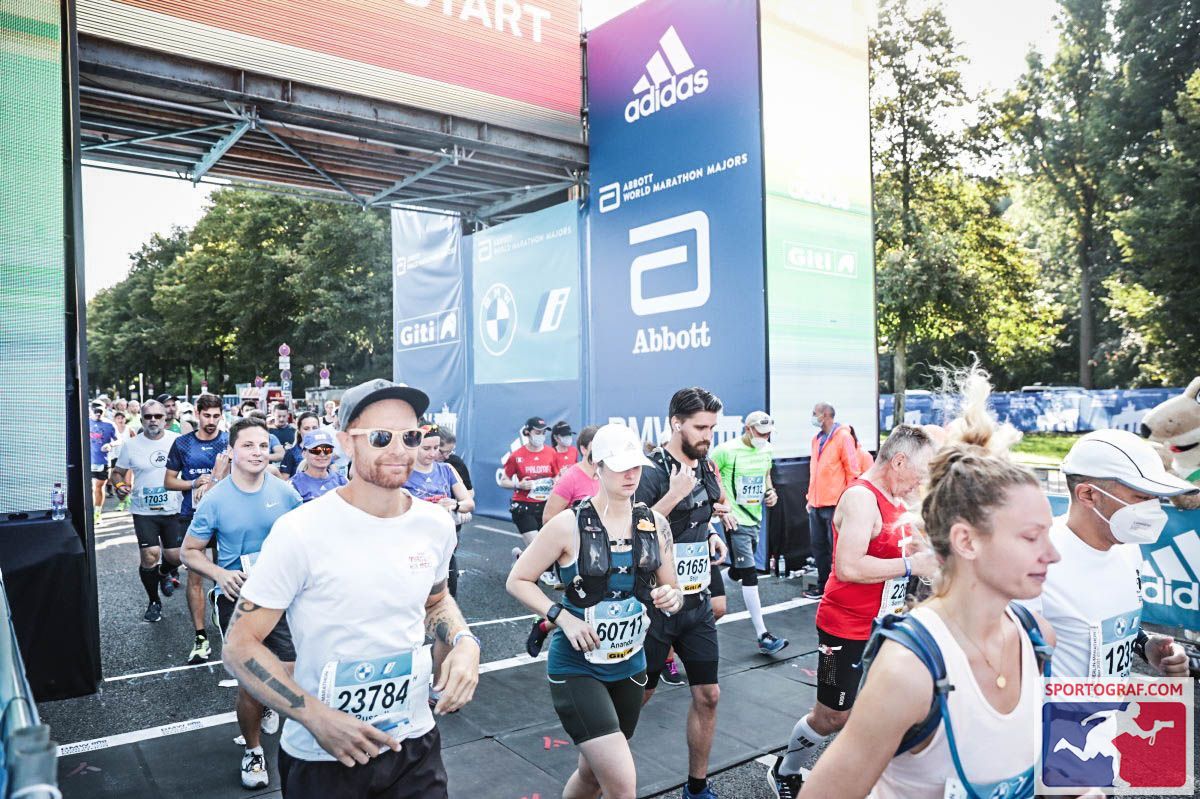 Starting the marathon with a smile

I’ve been living on and off in Germany now for close to 3 years, and most recently here in Berlin. In April of this year, the thought cam back into my head. I decided this was it! I’ll do the Berlin marathon this year! Easier said than done… I looked for tickets, and discovered that all the places to run were gone. No problem, apparently Berlin also has an inline skating marathon. how hard can that be? So, I immediately signed up. then after more research, I also discovered that it is possible to get a ticket to run via tour companies. Nice.

So I found the cheapest package for a tour, and payed for my hotel and entry. I never used the hotel, but that’s a small price to pay for a once in a (my) lifetime event. 🙂

So, now I was skating in the inline marathon on the 25th September, then running on the 26th! easy peasy… haha

There was a serious lack of training. I was doing this for fun, so didn’t really put much effort into training properly. I borrowed some inline skates, which promptly hang on my wall, till the day of the race. I went for a quick 30min skate in the morning, which should be enough to skate the race I thought. Poor decision in hindsight… I hadn’t actually ridden inline skates since I was given a pair for Christmas when I was 12. And as for the running marathon, I didn’t train specifically for that either. I’m pretty fit already, as I workout 5 days a week, and are active 7 days a week. But I only actually do a 5km run Monday - Friday. I figured that would be enough. 🙃

This was up first, and I figured it would be the easy one. I was wrong, haha. While I had no problem skating, I just couldn’t keep to a fast enough pace. The race was being packed up around me as I tried my best to catch the others. And because I lost my iPhone at the start line, I couldn’t even check the course map online. So while I wasn’t tired or sore, I only managed to make around 10km of the course before it literally disappeared, and I had to find my way back to the start line feeling a little dejected.

after getting totally bummed out, I walked home to see if I could at least salvage the day by finding my iPhone. I opened up Find My and lo and behold, it was shown as being in roughly the area I dropped it. I locked the phone, put it into lost mode, and disabled Apple Pay just in case someone not so trustworthy had found it. I then jumped on my scooter and rode the 20mins back into the event area to see if I could find the phone. Unfortunately I didnt have another device to use while I was in there, so had to look the old school way by checking rubbish bins, and asking people for help. Which they did. People are very helpful, when you ask nicely. One of the marathon helper’s offered me his android ph so I could check on iCloud.com, but I got caught up in the 2 factor authentication. I found out the next day, that if you scroll down, you can bypass 2 factor authentication for Find My…. duh!?

Another loss for the day, not the greatest start to the weekend.

I woke up Sunday morning, and to be honest, I was thinking more about trying to get my iPhone back than running the marathon. I’d been tracking it all night and had watched it going backwards and forwards across Berlin - In the back of a rubbish truck by the looks of it. I even tracked down the email address of the business owner to where the truck was parked. But never heard back. It was late Saturday evening after all.

In the morning I saw htat my phone was back at the Marathon and close to the start line! So I made a detour on my walk in, and walked right past what I thought was probably the truck with my phone in its belly. I didn’t think it was worth asking to look inside…. haha… its likely not possible anyway, even if the driver would have agree. So, instead, I wrote the phone off, and went into the Marathon prep area.

The atmosphere was amazing!

So many excited runners, super cool.

After waiting for the elite runners, and all the other various level of runners to start, It was my turn. I was in the last block of people to leave, the folks who had never run a marathon, and those who had times slower than 4:15. 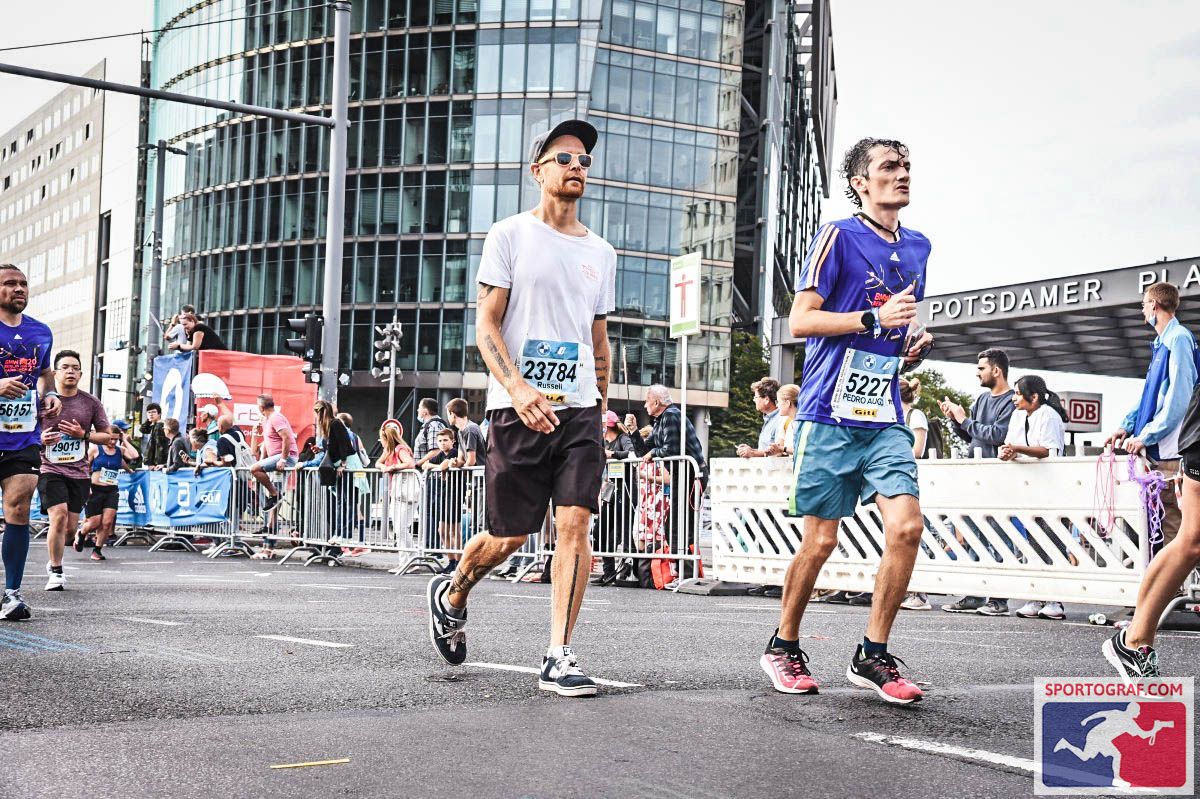 Giving my beaten down legs a rest
The first half of the race went great, considering I’ve never ran more than 5km at one time before. I ran the first 24km, and passed the half way point in less than 2 hours! I was super proud, and felt invincible. But from there till the end, I’m not gonna lie, it was tough. I was counting down the kilometers, and had to alternate between walking and running. I watched the 4hr pacemaker, followed by the 4:15 and 4:30 pacemakers pass by me. And there was no resistance on my part. I was optimistically hoping to finish in less than 4, but that was a lofty request with no specialized training, and running in skate shoes…

hah. so silly of me. 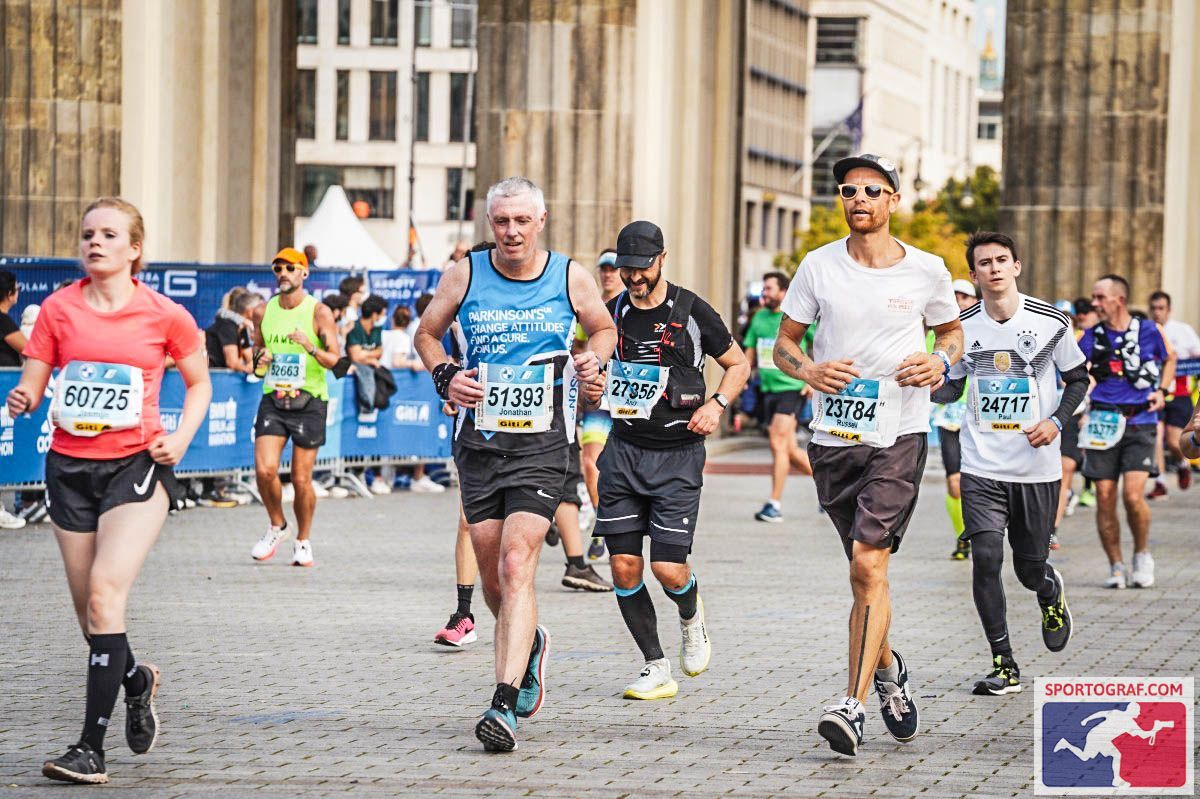 Passing through Brandenburger Tor, near the finish line
I managed to run the last 2km on my aching legs, and my official time was a respectable 4:44:45! I’m pretty proud of myself for finishing, and are pretty sure I’ll likely never do another marathon again… well maybe finishing the inline skating would be pretty cool. I grabbed my finishers medal, all the snacks available, and found a nice quiet spot to take my shoes off and stuff my face. It was hard sitting down My legs were aching, and my feet had massive blisters. But I didn’t care, I’d finished the MArathon. That was all I wanted to do… Finish.

I couldn’t convince my legs to walk the 5km home, so caught the bus.

Even though, I’d kinda given up on getting my phone back. NOw that I’d finished the marathon, I figured anything was possible. So I tracked it again over night, and saw that it had parked up at a different business Monday morning. I searched the address online line and found contact details for a refuse company located there and sent them a last ditch attempt email. Surprisingly I heard back quite quickly, with the details for the actual business I should be contacting. I looked them up, and sent out another hail Mary email. I also heard back from that company quite quickly. I was given the name of someone in the office I could contact, and told that it would be totally cool for me to come search for my iPhone.

I still was optimistic, but not really sure I’d find the phone, as surely it must be under tonnes of garbage.

But, as I arrived and walked up to the office - before I could even spit out two words of my broken Deutsch, the guy standing outside was like “Handy?” The German word for Mobile Phone Yes! I answered, and he went straight inside, and handed it right to me.

I would never have believed it. And what I thought was craziest of all. The phone was totally undamaged, and still had 50% battery!

What a great weekend.