The past couple of years i’ve been noticing i’ve had some small stomach and digestion problems. Nothing major, but as I have a natural tendency to always try and improve and fix things… I have become more and more interested in the gut biome.

I’m no expert, but as I understand it, our gut is filled with millions of bacteria all competing for resources. Obviously we want the ones which benefit and keep us healthy to flourish. I’ve read (and listened to) many articles exploring the benefits of a healthy gut biome - and I’’m all in. There are many tasty sources to ingest healthy living bacteria; Yoghurt, Kimchi, Sauerkraut, Kombucha and Miso are some of the more well known ones. I regularly eat or drink some of these - in fact, I eat kimchi, and my own home made sauerkraut every morning for breakfast. For the past 3 months, I’ve also been brewing and drinking my own water kefir! 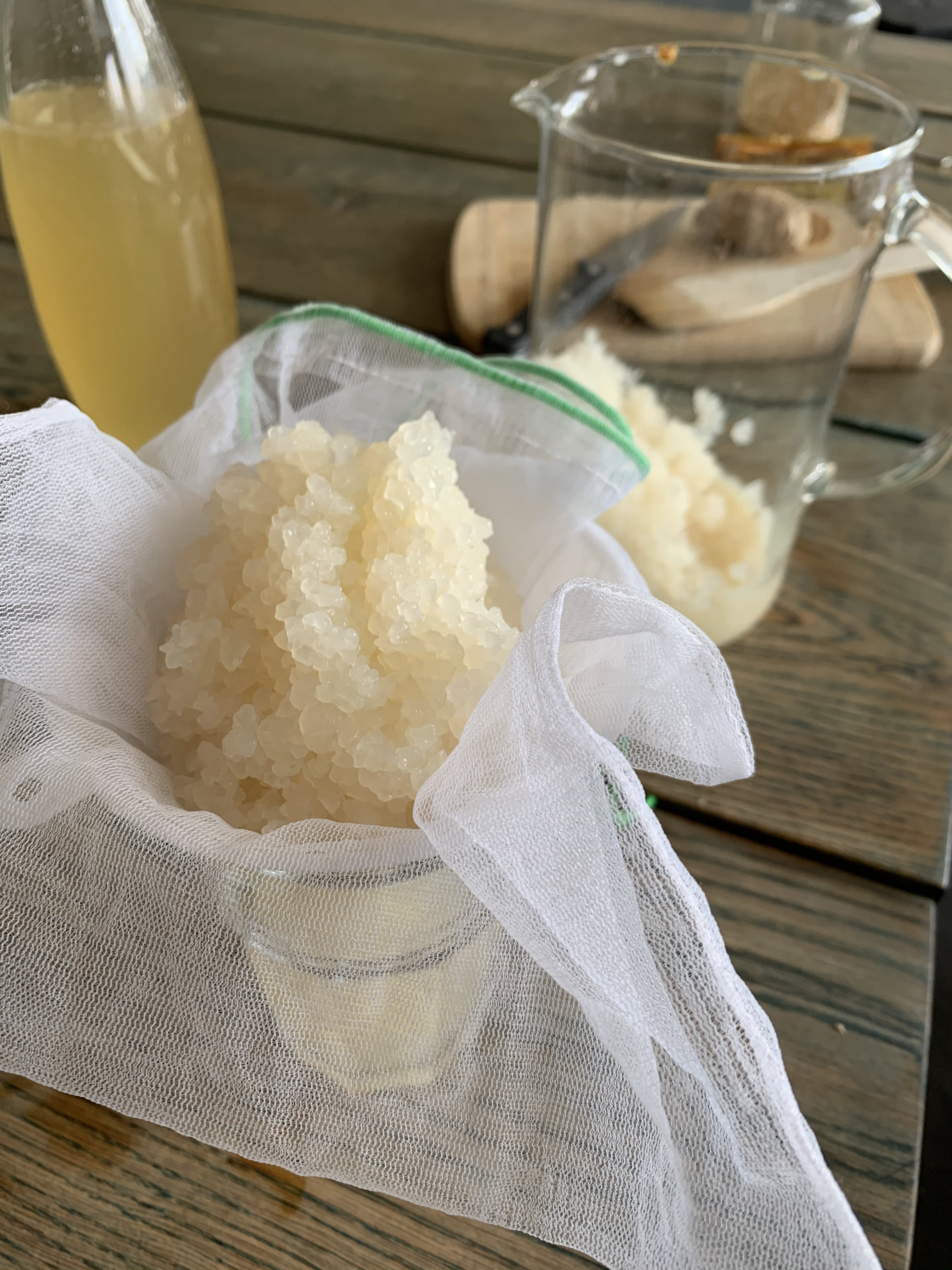 You may have heard of regular Kefir made from milk (which I have also brewed - for around 6 months before I left Australia). Water Kefir is similar, but brewed using water (and sugar/fruit) instead of milk. I’ve had some very noticeable benefits to my digestion since making and drinking this magic drink the last few months - so I figured I’d post my recipe and the brewing process which I use. It’s well and truly integrated into my weekly routine, and I actually look forward to it. It’s super easy to make, doesn’t take long to brew, it’s cheap - it tastes great, and best of all - it’s healthy! 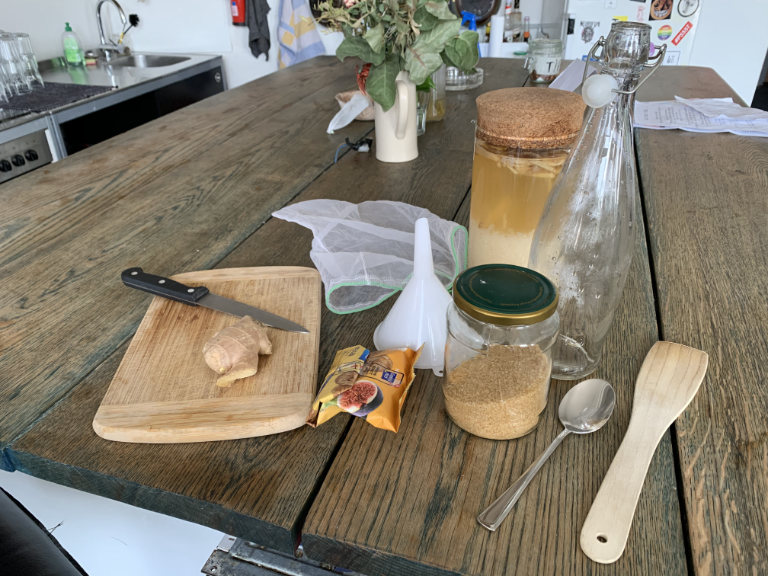 I was originally given some grains from a friend who knew I was into that kind of thing, and quickly found some recipes online. I’ve tried a number of variations, and this is what works the best for me. The entire process takes around 3 days, but only around 20mins actual prep time. 10mins for the first fermentation, then another 10mins 2 days later for the 2nd fermentation

Apparently, Kefir grains don’t like metal, so find yourself some nice glass jars/bottles with plastic lids. Also use a wooden spoon, and a plastic funnel/sieve

I was originally given around half a cup of grains, but the grains multiply when they’re healthy. So even if you only start with a small amount of grains, you’ll have more than you know what to do with in no time. 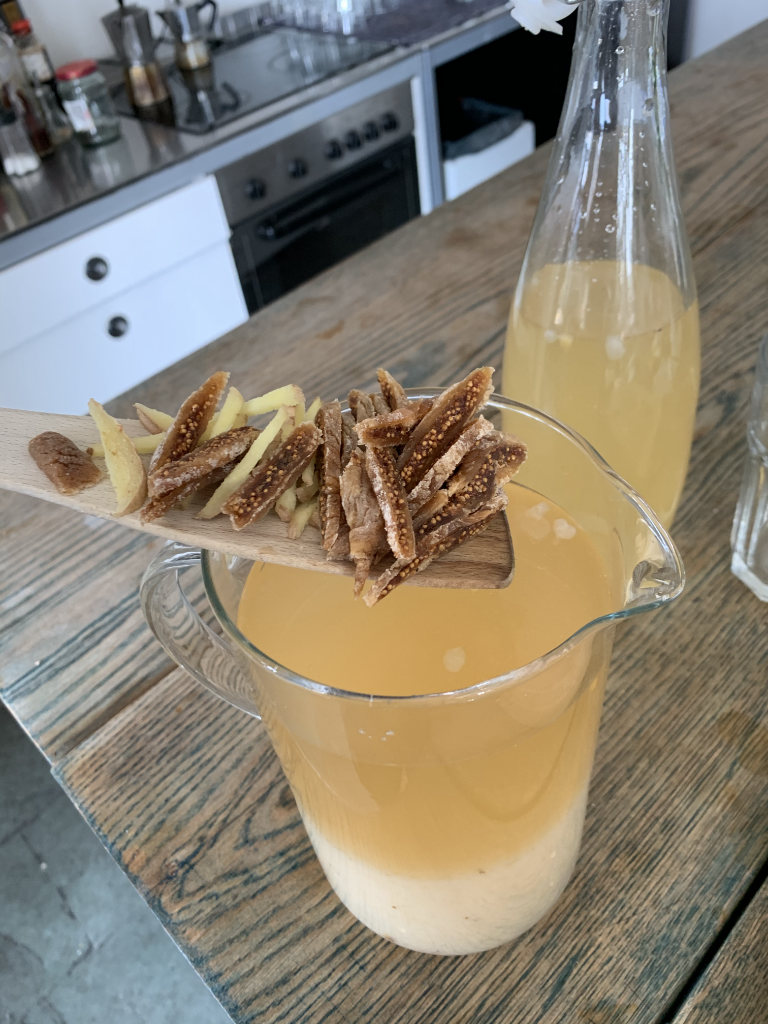 Dissolve 3 big tablespoons of raw sugar in some hot water, in a big jug/jar. (I use hot water from the tap) when it’s dissolved, top up the jug with cold water to bring it back to room temperature. Add your kefir grains. Chop up 2 dried figs, and a decent amount of ginger. drop the ginger and figs into the jug.

Put the jug somewhere at room temperature with natural light for 2 days (48hrs) and let it sit. The mixture will bubble away, so make sure to not seal the jar/jug. I have a big cork which keeps out bugs, but allows the gases to escape.

This is where the magic happens, and the brew goes from tasting a little like vinegar, to tasting awesome! You can drink the mix without the 2nd brew if you’re impatient, but trust me, you want to brew that extra 24hrs. 🙂

Use a plastic strainer/filter to separate the liquid from the grains and fruit, and transfer the liquid to another glass container. (I have a glass bottle with a sealable plastic lid) I normally scoop off the fruit and ginger with a wooden spoon first. You can totally eat the fruit, but I usually throw most of it away though…

Add another 2 chopped dried figs, and some ginger into the bottle (it should only have liquid in it at this point) Seal the bottle and put it back to your spot at room temp with natural light. That’s it!

Rinse your grains in cold water, and start up your next brew!

After 24hrs, you should have a super bubbly, super awesome water kefir drink! I run a constant brewing cycle, making a fresh batch every 2 days. Doing it like this, I am drinking around half a little of Water Kefir each morning with breakfast. 👍 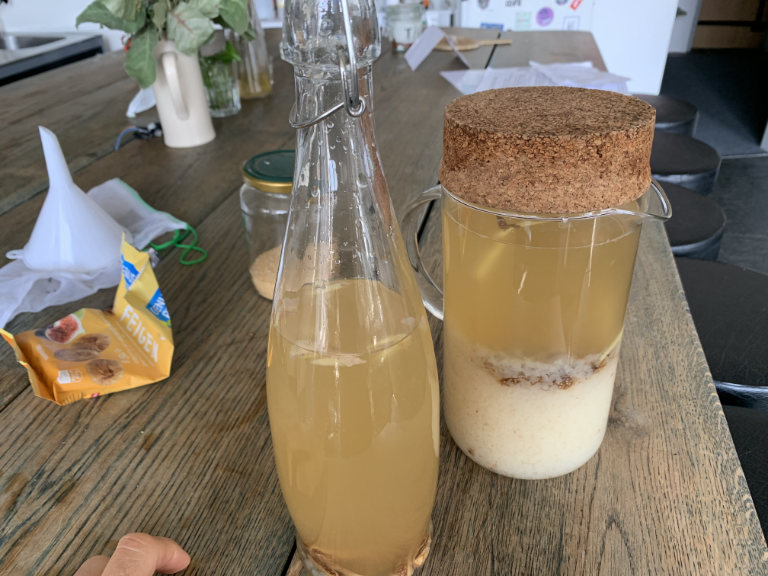 Migrating away from Mailgun to Amazon SES